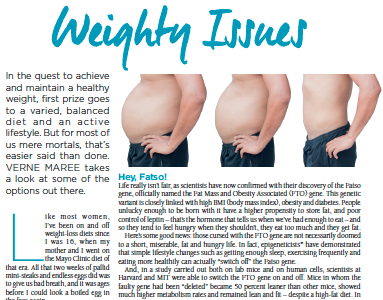 This article was first published in Expat Living on July 2017.

In the quest to achieve and maintain a healthy weight, first prize goes to a varied, balanced diet and an active lifestyle. But for most of us mere mortals, that’s easier said than done. VERNE MAREE takes a look at some of the options out there.

Like most women, I’ve been on and off weight-loss diets since I was 16, when my mother and I went on the Mayo Clinic diet of that era. All that two weeks of pallid mini-steaks and endless eggs did was to give us bad breath, and it was ages before I could look a boiled egg in the face again.

Then came the cabbage soup diet (you wouldn’t have wanted to share an elevator with me), an early version of the Weight Watcher’s diet (where I actually put on weight) and, my all time favourite, the wine and cheese diet. I tried appetite suppressants, too, but they gave me the screaming heebiejeebies and kept me up until dawn. (Whether that was to have fun or to get lucky is now mercifully shrouded in the mists of time.)

Though weight-loss diets and pills do work up to a point, they’re at worst dangerous and at best illusory – illusory because they’re simply not sustainable for the long term. And for lifelong weight management, it’s the long term that counts.

Life really isn’t fair, as scientists have now confirmed with their discovery of the Fatso gene, officially named the Fat Mass and Obesity Associated (FTO) gene. This genetic variant is closely linked with high BMI (body mass index), obesity and diabetes. People unlucky enough to be born with it have a higher propensity to store fat, and poor control of leptin – that’s the hormone that tells us when we’ve had enough to eat – and so they tend to feel hungry when they shouldn’t, they eat too much and they get fat.

Here’s some good news: those cursed with the FTO gene are not necessarily doomed to a short, miserable, fat and hungry life. In fact, epigeneticists* have demonstrated that simple lifestyle changes such as getting enough sleep, exercising frequently and eating more healthily can actually “switch off” the Fatso gene.

And, in a study carried out both on lab mice and on human cells, scientists at Harvard and MIT were able to switch the FTO gene on and off. Mice in whom the faulty gene had been “deleted” became 50 percent leaner than other mice, showed much higher metabolism rates and remained lean and fit – despite a high-fat diet. In human cells, deleting the gene increased the energy burning in fat cells so that less fat was stored.

Epigenetics is the study of changes in organisms caused by modification of gene expression rather than alteration of the genetic code itself.

Will it one day be possible to swallow a pill that switches off the FTO gene? Maybe so – but possibly not in our lifetimes, unfortunately; and most definitely not before that upcoming beach holiday, dream wedding or crucial class reunion!

More important than bikini aesthetics, however, are the serious hazards that obesity poses to health – from metabolic syndrome, heart disease and stroke to respiratory disorders and even depression.

Why is that so? According to DR GANESH RAMALINGAM, high levels of fat have the effect of narrowing the main blood vessels. This elevates blood pressure and forces the heart to work harder, reducing the flow of blood to all the main organs, especially the kidneys, heart and brain, and leading to their failure.

Apart from physical diseases, the social implications are great, he says. They include psycho-social problems like depression, poor self-esteem, body image disorders, social isolation and stigmatisation.

The last couple of decades have seen real breakthroughs in the treatment of obesity, he says, led initially by Australia. “Some 20 years ago, Australia was the region’s biggest promoter of the Obesity Surgical Society. There was a lot of scepticism then, but now it’s part of mainstream medicine.”

Appropriately prescribed and holistically managed, bariatric or weight-loss surgery is now regarded as a powerful tool that saves lives – particularly in the treatment of early Type 2 diabetes.

Bariatric surgical options include the sleeve gastrectomy, the gastric band and the gastric bypass, which has proven to be an effective metabolic surgery for diabetics. The inflatable intragastric balloon, inserted into the stomach through the upper digestive tract by means of a gastroscope, is a nonsurgical weight-loss option that is becoming increasingly popular.

Greatly reducing the amount you’re able to eat, the operation is totally reversible, and the balloon usually stays in for six months. Many of the candidates for this procedure tend to be relatively young, says the doctor – in their 30s, 40s or 50s.

Sometimes, he finds that counselling helps them to realise that they are not overweight, that they are healthy and beautiful as they are. Instead of talking in terms of kilograms and BMIs, he says, he prefers to talk in terms of health and fitness.

For a successful result, you need the right attitude and a real commitment. “Your aim may be to lose weight; but mine is for you to develop good habits – to be more active and to eat more healthily – for the rest of your life.”

You must want to change, he adds. “I can’t do it for you. To make the necessary lifestyle adjustments, you have to prioritise your health. You have to value yourself and your health more than you value your work, your colleagues, your clients, your relationships.”

He doesn’t like the hard approach, however. “I think of myself as a planter of seeds for change: healthy attitudes, healthy perspectives.”

• According to the WHO, 1.4 billion people worldwide are overweight, and a third of those are considered obese.
• Previously found mainly in developed countries, the obesity trend can now be seen in developing countries, too.
• Obesity is directly related to an increased risk of Type 2 diabetes, cardiovascular diseases various cancers, Alzheimer’s disease, dementia and more.

Message From Our CEO

What Causes A Hiatal Hernia?